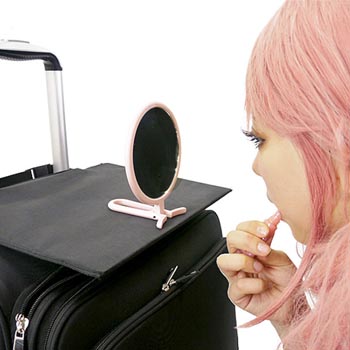 Making the costume is the first battle; transporting it is the next battle. Manufacturer Frentrep has developed a luggage case called Coscase, and it’s designed with cosplayers in mind. Coscase is about the size of most carry-on luggage cases, but it’s equipped with plenty of extras that make moving costumes to an event more convenient.

Frentrep is crowdfunding Coscase on Motion Gallery, a Japanese crowdfunding website. Each basic set, which includes the case and one strap, costs approximately $150. Unfortunately, the price may be out of budget for many cosplayers.

The body of the case is designed to be small enough to fit between bus seats, but it can also expand to accommodate storage of a wig case for any wigs that require too much styling to put into a bag. The body of the luggage comes in black, light blue, and purple, and the side and back straps come in several colors of which customers can choose two. The straps can be used to hold long props such as swords or equipment like umbrellas, or they can hold a jacket in place.

Most unique to this luggage is a removable make-up table for cosplayers on the go, but it would also be useful for making use of limited space in a cramped hotel room. The table can be secured to the top of the luggage and is flat and sturdy for holding portable mirrors and make-up. When not in use, the make-up table fits in a pounch inside the case.

Coscase can only be purchased through its crowdfunding campaign on Motion Gallery. The campaign ends March 31 with a target goal of approximately $31,000.