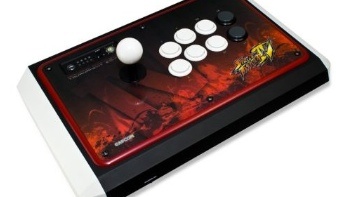 No more excuses as Mad Catz and Capcom officially announce their line of licensed Street Fighter gear after months of pre-order frenzies.

If you’re serious about your virtual fisticuffs like I am, the February release of Capcom’s Street Fighter IV is looking to sucker punch your bank account with a ferocity that only the likes of Rock Band could possibly match. From deciding between the regular and collectors editions of the game, there’s also a matter of hardware to consider. PlayStation 3 fans have it easy with a long line of excellent Hori Real Arcade Pro products to choose from, while Xbox 360 fans currently have one option: purchase a cheap Hori EX2 and risk it all in one of the most daring hardware mods one can attempt. Trust me, for I have walked through the valley of the shadow of death.

All of that shall be a thing of the past as Capcom and Mad Catz have officially announced their line of arcade sticks and gamepads in a variety of characters and quality levels, all due out within a week of the games release for the PlayStation 3 and Xbox 360. Starting at the lower end with the gamepads, gamers will have a choice between Ken, Ryu, Akuma, Chun-Li and Blanka emblazoned across a Sega Saturn inspired controller for the price of $39.99.

Of course, if you’re serious, you’ll want to step up to flavor country and get yourself a stick. At $79.99 is the Street Fighter IV FightStick which is most certainly a step up from the always questionable Hori EX2, and features quick connect buttons that should make for easy modifications should you want to upgrade it yourself. Now if you’re looking to compete or have more money than sense, you can go for the Tournament Edition stick at $149.99. With a design by Capcom taken from community all-stars and official Sanwa parts, the Tournament Edition stick is probably the nicest arcade controller you will ever play on in your life.

All of these fine accessories have been available for pre-order for quite sometime now and those entrenched in the California Street Fighter community have already given their enthusiastic approvals.