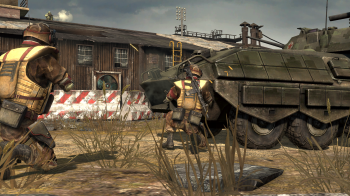 Homefront is the most pre-ordered game in THQ history but whether it will be enough to save Kaos Studios is still an open question.

In January, employees at the New York-based Kaos Studios expressed concern that after Homefront was complete the studio would be relocated to Montreal, forcing employees to choose between moving to another country or giving up their jobs. Montreal is a major development hub due to the generous tax breaks available from the Quebec and Canadian governments and THQ recently opened a 400-person-capacity studio in the city.

The decision hasn’t yet been made but with the release of Homefront looming, THQ Vice President Danny Bilson said the move remains a possibility that hinges largely on the success of the game. “Y’know, I think that the power of the guys in that studio who really built this game – I really have tremendous respect for them,” he told Eurogamer.

“I tell them the more successful a game is, the better the economics are for the franchise, and that will help to influence what we do. So we haven’t made any decisions at the moment. That’s the truth. We’re going to look at how it goes. We don’t want to relocate people just to relocate people,” he explained. “A lot of it has to do with how successful it is and how strong that core team comes out on the other side. I love those guys. I’ve worked very closely with them on this game for years. There’s nothing disrespectful going on at all. We’re trying to do what’s best for everyone.”

Bilson said Homefront has already racked up 200,000 pre-orders in the U.S. alone, making it the most pre-ordered game in THQ history – and a hopeful sign for the future of Kaos. Homefront comes out on March 15 for the PC, PlayStation 3 and Xbox 360.