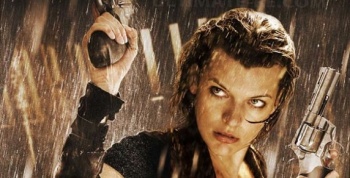 The fifth installment of the successful movie series should arrive just in time for Doomsday.

It doesn’t look like having a Devil May Cry movie to make is doing anything to slow down production of Resident Evil films at the Sony-owned studio Screen Gems. Quite the opposite, in fact, as the gap between the fourth and fifth movie is going to be the shortest one yet.

As with the last three movies, the new Resident Evil, which has the imaginative working title of “Resident Evil 5,” is coming out in mid-September. But where previous installments have been separated by a three year gap, this time, it’s only two, meaning that the movie will hit theaters in 2012. Very few details are known about the plot, and it’s unlikely to have much in common with the videogame version of Resident Evil 5. It has been confirmed, however, that the movie will be shot in 3D, like its predecessor, Resident Evil: Afterlife.

The Resident Evil movies aren’t the finest films in the world, but they do make a heck of a lot of money, which is probably why Screen Gems is so eager to get another out the door so quickly. Afterlife made nearly a quarter of a billion dollars in the foreign market, and around $60 million domestically. Interestingly though, while the domestic revenue was up from previous installments, attendance was actually at an all-time low for the series, which means that much of the domestic revenue was due to higher ticket prices for 3D movies.

Resident Evil 5, which will undoubtedly pick up a subtitle before it hits theaters, is scheduled for release on September 14th 2012.