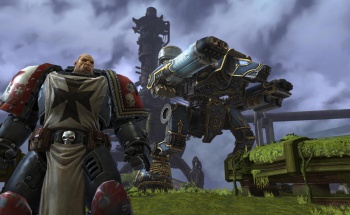 Everyone from Activision to Paradox offered a job to ex-Relic/Vigil employees.

Sad news came down the pipe from THQ today. In the process of shifting Warhammer 40K: Dark Millennium Online away from an MMO, 118 game designers are out of a job. 79 positions at Vigil Games in Austin, Texas, and 39 at Relic Entertainment in Vancouver are now redundant. While being laid off sucks, there has been an unprecedented amount of support from other videogame development companies on Twitter since the news went out earlier today. The hashtags “#relic #thq #gamedev” popped up in my feed – a lot.

It all seemed to begin with Kevin Dent, a videogame insider with experience raising funds for a lot of game startups. “If any of your friends from the THQ layoffs are looking for work, have them ping me, I know a few pubs and studios looking for talent,” he said and was then showered with tons of job offers from various studios across the world.

“A message to devs who have been impacted by the #layoffs at #Relic and #Vigil. Feel free to contact me about employment with Activision,” said headhunter for Activision and oneof their Call of Duty studios Treyarch, Michelle Gallego.

“Adding to the job posting stuff for the Vigil/Relic folks; BioWare are looking across multiple studios including Austin,” said a level designer from BioWare Montreal, Gary Stewart, with a link to the careers page.

“Hey Vigil/Relic folks who are good at server programming. Popcap needs you! Seriously. I need you,” said Allen Murray from PopCap, makers of everyone’s favorite time-eating games like Bejeweled and Plants Vs. Zombies.

“Oh man. Sad to hear about Vigil/Relic. Don’t know if we have any spots open right now, but you Vigil guys should send CVs anyway,” said Mike Henry from Twisted Pixel games, the guys behind Kinect title Gunstringer.

“Relic/Vigil folks- We are Hiring: Animator, Environment Artists, FX Artists, Interface Design, Sr. Gameplay Programmer,” read the feed for Insomniac Games, our neighbors here in Durham, NC who make Rachet & Clank and Resistance. They even offered a link to their job openings page.

“Talented devs at Relic Games! – Paradox and our partnering devs could always use great strategy devs – get in touch!” exclaimed Shams Jorjani, a producer at Swedish outfit Paradox Games.

“Good luck to all those let free at Relic and Vigil Games. If you’re burnt out & looking for something fresh to be apart of, drop me a line,” said Robert Bowling, also known as FourZeroTwo, the former Creative Strategist of Call of Duty at Infinity Ward. There’s rumors he’s working on a new project, and he would conceivably need talented designers on his team.

“3000AD is hiring anyone with a pulse (u have to qualify – and no zombies plz) and who is tired of working for DA MAN!” was the pitch from Derek Smart. 3000AD is Smart’s company, currently developing its own MMO Line of Defense.

“Stardock is hiring game developers and artists,” said Brad Wardell, CEO of the company that published Sins of a Solar Empire and developed Elemental.

“Twitter is amazing, all of those people got laid off and the response is pretty awesome,” Kevin Dent said later. ” I literally don’t know of any [other industry where this would happen]. It makes me feel really good to be lucky to be part of it.”