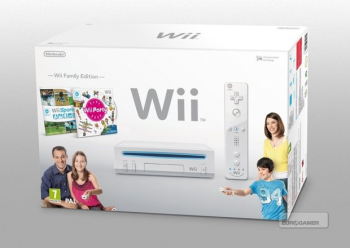 Kids don’t burn any more calories playing “active” games than they do sitting on their butts playing Super Mario Galaxy.

It seems like a no-brainer. Videogames that make you move around should lead to a lot more calories burned – at least on average – but apparently playing games like Wii Sports or Dance Dance Revolution doesn’t lead to a higher rate of exercise for kids, at least with 39 of them in Texas. That’s according to a new study published by researchers from the Children’s Nutrition Research Center at Baylor College of Medicine in Houston.

“We expected that playing the video games would in fact lead to a substantial increase in physical activity in the children,” said lead researcher Tom Baranowski, PhD. “Frankly we were shocked by the complete lack of difference.”

The study was pretty simple. Dr. Baranowski split 78 kids into two groups, gave them a Wii and a choice of active or inactive games like EA Sports Active or Dance Dance Revolution: Hottest Party 3 or Madden or Mario Kart Wii. The kids wore an accelerometer on their legs for 13 weeks which allowed researchers to monitor how many calories were burned over that period. Whether kids compensated for the more active games by exercising less at school isn’t known, but overall, there was no difference in the amount of exercise measured between the kids who played the active games and those who sat on their butts to play.

Dr. Baranowski admits there are limitations to his study. The accelerometer tracked leg movements, so all the motion of the kids’ upper body could have resulted in more exercise than this study could track. Seeing as you hold the Wii Remote in your hands, and perhaps 90 percent of the motion required in Wii Sports is in the upper body, I’d say that this study could have used a different method.

Nevertheless, Dr. Baranowski said based on his study that “there’s no public health benefit from having those active video games.”

At least we are virtually certain the kids actually wore the accelerometer for the 13 weeks of the study. If they followed directions, they got to keep the Wii and all the games.