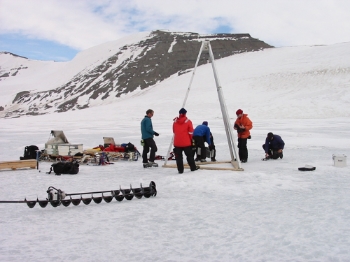 The diversity of life on planet Earth is one of the many wonders of nature. Many of us have seen in Finding Nemo just how drastically different life at the bottom of the ocean can be. But consider what life would be like inside bodies of water that have been cut off from interacting with the outside world for hundreds of thousands of years. A team of scientists from the British Antarctic Survey (BAS), and the Universities of Northumbria and Edinburgh is looking to find out by sampling bacteria found at the bottom of a previously inaccessible subglacial lake.

The lake in question, Lake Hodgson on the Antarctic Peninsula, was covered by a layer of ice approximately 1300 feet thick at the end of the last ice age, 100,000 years ago. That has shrunk to a thickness of only 13 feet today, giving the researches the perfect conditions to drill 305 feet down to the sediments at the bottom of the lake. They successfully managed to acquire samples of bacteria and were astonished by what they found. The large diversity of life found in the sediment was unexpected, given the lake they were sampling was only a mile wide.

“What was surprising was the high biomass and diversity we found.” Notes David Pearce, of the University of Northumbria. “This is the first time microbes have been identified living in the sediments of a subglacial Antarctic lake and indicates that life can exist and potentially thrive in environments we would consider too extreme.”

In an analysis of the DNA of the micro-organisms, the team found fossilized examples of extremophiles – species that have adapted to the most extreme of environments and survive without oxygen, instead relying on chemical reactions for respiration. One sequence was found to be related to the oldest known organisms on the planet, whilst 23% of their samples contained parts of DNA that have never been previously discovered.

This is a unique insight into the history of life on our planet, one only made possible by the melting of the ice sheet. The fact that this is the first time living microbes have been found this subglacial environment has generated a call for further research in the area. However, the wider ramifications of this discovery are much further reaching. The potential to find similar examples of bacterial life on the polar ice caps of Mars has long tempted the likes of NASA. This will only serve as another carrot on the end of a very, very long stick!