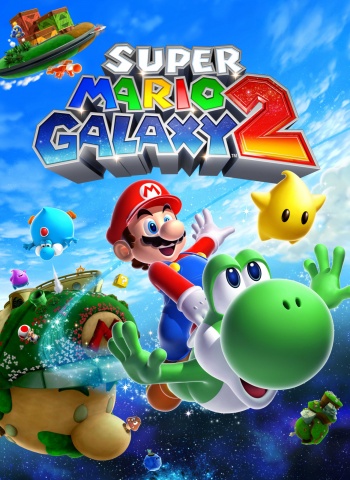 The world is one step closer to discovering who Mr. Gay really is.

The most absurd coincidence to arise in the history of humankind has presented itself in the form of the latest Super Mario Galaxy 2 art (which is possibly, but unconfirmed as the game’s official cover art). The original Super Mario Galaxy box art may have included a hidden message, found by noticing which letters were labeled with small shine marks, and while that message was coincidental enough, it appears that the sequel’s cover offers a direct response.

Looking closely at the box art for Super Mario Galaxy, you can see that the shine marks clearly spell out “U R MR GAY,” or “You Are Mr. Gay.” The game became known for exhibiting this silly, immature message, but nobody thought it could have actually been intentional, until now.

Looking at this art for Super Mario Galaxy 2, the shine marks notate “U R M A I A Y.” While “UR MAI AY” is nothing significant, and the controversial saga nearly ends right there, All is Brawl noticed that if you reverse the sequence, you get: “YA I M R U,” or “Yeah I am, are you?”

I’m speechless. The nature of a coincidence is such that it could happen twice, but this is almost on par with the kinds of hidden messages politicians leave for each other. Could it be that some kind of unknown creature or presence only has the ability to communicate through shine marks on Super Mario Galaxy box art? Is someone at Nintendo an expert at silly internet talk and intentionally putting these foolish messages on the boxes? Is this coming straight from Iwata-san himself? Nobody knows, but I can’t wait for Super Mario Galaxy 3, not only because I love the series, but because I have to know how this wraps up.