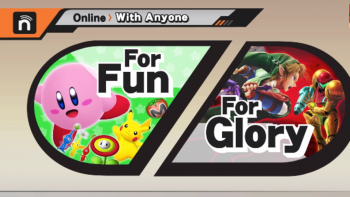 While the versions will be different, the character roster will be identical for both the 3DS and Wii U. There’s no knowing how many characters left we have yet to see. Announced tonight are both returning characters and new challengers.

Super Smash Bros. 3DS will mostly run at 60 frames per second; some Pokemon and assist trophies will move at 30 frames per second. The list of stages will differ somewhat. Some stages, like the tournament-favored Battlefield, will be available on both the 3DS and Wii U. These stages will have different designs for each system. Other stages will be available for one system or the other. The presentation showed footage of the following stages for the 3DS: Reset Bomb Forest, 3D Land, Spirit Train, Gerudo Valley, Arena Ferox, Tortimer Island, Living Room, Prism Tower, Rainbow Road, Find Mii, Balloon Fight, and Jungle Japes. Sakurai then displayed the following Wii U stages: Mario Galaxy, Pyrosphere, Town and City, Boxing Ring, Pilot Wings, Skyloft, Windy Hill, Garden of Hope, Wii Fit Studio, Palutena’s Temple, and Halberd.

Boss characters from other games will appear in Super Smash Bros, Sakurai announced. The Wiley’s Castle stage includes the Yellow Devil from Mega Man 2, and it will assemble on stage and obstruct the match. Players can attack the Yellow Devil, but only its sole eye is a weak spot. The player who gets the last hit on Yellow Devil causes an explosion that hurts all opponents. Sakurai noted that boss characters from other games will make an appearance in stages as well.

Finally, the 3DS has its own mode called Smash Run. Players explore and fight under a five-minute time limit, collecting powerups, and up to four players can play at a time.

Agents of S.H.I.E.L.D. Finale Will Feature a Very Special Guest