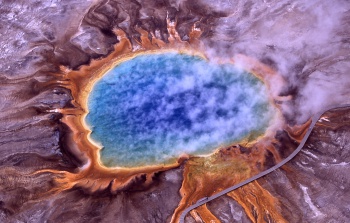 The massive supervolcano beneath Yellowstone National Park is melting the asphalt roads in the area, leading to a partial closure of the park.

Tourists are being barred from certain areas of Yellowstone National Park due to roads melting under the volcanic activity. Specifically, the road between Old Faithful and Madison Junction is said to be “dangerously compromised,” according to Yellowstone spokesman Dan Hottle.

“It basically turned the asphalt into soup,” said Hottle. “It turned the gravel road into oatmeal.”

Park officials warned tourists to avoid hiking in the affected areas or face a high probability of accidentally stepping into boiling hot water. Another park spokesman said the closure would only be temporary, but it is not known how long it will last. Three million people visit the park every year.

The supervolcano beneath Yellowstone hasn’t erupted in 640,000 years, and in 2013, geologists discovered that it is two-and-a-half times larger than previously believed. The region experiences between 1000 and 2000 earthquakes a year due to volcanic activity.

According to the Yellowstone Volcano Observatory, “Contrary to some media reports, Yellowstone is not ‘overdue’ for a supereruption.”

Of course, that’s just what they want us to think. Are you at all concerned about the Yellowstone supervolcano? Have you visited the national park? As someone who studied vulcanology in college, I’d love to, one day.