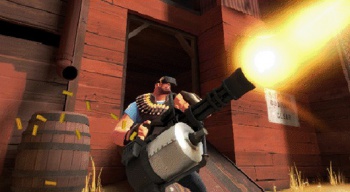 A future update for the first-person shooter lets you dodge rockets with a virtual reality headset.

Valve expressed interest in the Oculus Rift when it was getting Kickstarted, with CEO Gabe Newell even lending an endorsement for the product in the original promo video. Since then, Valve developers have been working on virtual reality behind the scenes, and the end result is a “VR mode” for Team Fortress 2, coming soon as a free update.

Valve Software developer Joe Ludwig worked with Oculus to port the free-to-play shooter for the headset’s development kit, and revealed that the game will eventually support VR headsets. In an interview with Engadget, he explained that Team Fortress 2 was an obvious choice for experimentation. “The Team Fortress community is large and healthy. There are millions of people playing TF every week, but they’re also used to us shipping a lot of updates.”

Ludwig also revealed that there is a team dedicated entirely to VR within Valve that works closely with Oculus, with both companies exchanging software and dev kits. “We’re friends,” he explained. “They help us out with hardware and we help them out with software.”

Other games in Valve’s library, such as Left 4 Dead, Half Life 2 and Portal, have only undergone experimentation with “head tracking a little bit”, and don’t appear to be ready for release any time soon.

In the meantime, Oculus’s Kickstarter blog celebrated the announcement by awarding a Team Fortress 2 Rift developer hat to those who backed the campaign at any level or pre-ordered a development kit. The team also acknowledges that using VR in the game may take some getting used to. “It’s a fast paced, intense experience,” the blog post advises. “TF2 wasn’t originally designed for virtual reality and skirting around the map at super-speed in VR isn’t for everyone. You’re going to want to ease yourself in and acclimate over time.”

Team Fortress 2‘s VR Mode will be released “in the coming days”.