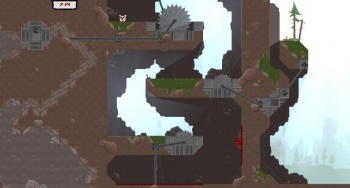 Team Meat’s issues with the treatment of Super Meat Boy on the Xbox Live Arcade have been well documented. A lot of promises about giving the game a big push were made in exchange for making the game a 30-day timed exclusive on the service but in the end, most of them didn’t pan out. Because of that, the studio is in no great hurry to hop back in bed with Microsoft.

“I don’t think we’ll work with them ever again,” co-founder Edmund McMillen said on the IndieGames podcast (via Develop). But he added that he’s still “on good terms” with an unnamed producer at Microsoft, presumably the one the team worked with on Super Meat Boy.

“He also happens to be the producer on every good game on the fucking system [Xbox 360],” McMillen continued. “It felt like he was the only person who really believed in us, and he felt like a friend.”

Even though it’s been almost a year since the game launched on XBLA, McMillen said it hasn’t once been put on sale and he doesn’t know if it ever will. He claimed the studio asks every month if the game can be included in a sale or get some kind of promotional push, but the answer is always no.

Tommy Refenes, McMillen’s fellow co-founder, said the duo would only be interested in going back to Microsoft “if it’s more on our terms, which I don’t feel like they’ll ever want to agree with.” Not that it appears that it really needs to; despite being a timed exclusive, Refenes said the PC version of the game on Steam has sold roughly twice as many copies as the XBLA release.