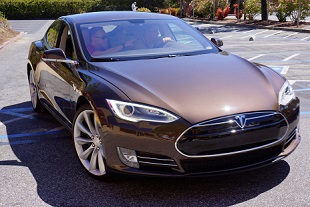 Current Tesla Model S owners can get the titanium underbody upgrade for free.

Tesla’s Model S sedan is already considered to be one of the safest cars on the road, but Tesla is trying to make them even safer.

New Model S sedans will now ship with a redesigned protective underbody shield, most of which is made from aluminum and titanium. And if you already have a Model S parked in the driveway? Tesla will upgrade your ride, free of charge.

Why the change? In 2013, two Model S cars were involved in accidents that resulted in car fires. While no one in the aforementioned sedans were killed or seriously injured, there was a bit of a PR storm surrounding the fires.

“…we felt it was important to bring this risk down to virtually zero to give Model S owners complete peace of mind,” said Tesla CEO Elon Musk in a post to the company blog. “Starting with vehicle bodies manufactured as of March 6, all cars have been outfitted with a triple underbody shield. Tesla service will also retrofit the shields, free of charge, to existing cars upon request or as part of a normally scheduled service.”

The new shield is essentially an aluminum-titanium sandwich. The outermost layer is a “rounded, hollow aluminum bar” that is designed to deflect impact objects, or at least direct them away from the battery pack. The middle layer is a solid titanium plate, followed by a “shallow angle, solid aluminum extrusion.”

Car fires should always be of concern, naturally, but a one-in-8,000 fire risk with zero fatalities or serious injuries is a pretty solid track record. Granted, there aren’t nearly as many Tesla’s on the road as there are gas-powered cars, but if Tesla keeps up on this safety kick, it wouldn’t surprise me if the forthcoming Model X scored just as well with the NHTSA.