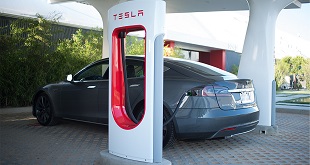 Thinking about electric cars? Tesla Motors probably comes to mind, along with the Chevy Volt. Tesla has come to be a powerhouse of sorts in the U.S., where its sales numbers in some states are rivaling luxury car manufacturers.

But the electric is a long way from being the norm in American driveways. So much so, that Tesla CEO Elon Musk is taking steps to electrify open standards among all electric car makers.

Speaking at the Tesla UK launch, Musk said that he plans to open patents related to Tesla’s Supercharger platform. For the uninitiated, Supercharger stations gas station-esque locations where Tesla Model S owners can charge their cars for free. A full charge takes around an hour to complete, and the lifetime cost of electricity used is factored into the selling price of the Model S.

Tesla currently has proprietary technology that makes such super-quick battery charging possible, but Musk wants to open up the tech to potential partners. The catch? Any company that partners with Tesla needs to follow the “free for life” charging policy used by Musk and Co. Partners would also have to chip in to the existing Supercharger network — helping with maintenance costs, expansion plans, etc.

With companies like GM, Toyota, and Honda, among others, in the plug-in electric car mix, it will be interesting to see if any of these larger automakers bite. I could see Toyota playing ball, if only because of their past relationship with Tesla.