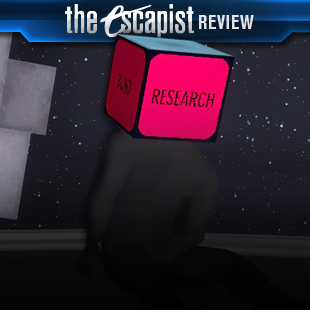 The Beginner’s Guide is about Wreden himself walking us through the work of another game designer that he looks up to, a friend of his named Coda. Coda stopped making games for some reason and Wreden created this academic mashup of Coda’s games as an attempt to get Coda designing again. But he was also motivated by trying to understand Coda and his methods by looking at the games he designed chronologically. He wanted to get to know Coda through his work.

Like The Stanley Parable, The Beginner’s Guide is a walking game. The graphics range from simple to complex and the controls are the same first person controls you’ve experienced in every other game from Call of Duty to Gone Home. The only interaction with the world that you have is walking to the next narration trigger, and this narration tends to be Wreden sharing his thoughts about Coda’s work with us. And this narration is eerily familiar. He begins talking about shared themes and recurring motifs in language that you likely have seen in game reviews and Youtube videos. He talks about how mechanics support the narrative or how certain gameplay elements detract from it. He talks about inconsistencies and controls and the feel that you get when playing Coda’s game, all things that game journalists the world over have said in reviews,analyses, and editorials proclaiming “games are art.”

As we wander through Coda’s work, Wreden’s presentation becomes more and more invasive. Flaws are glossed over by Wreden, or even edited out. Levels are altered so that you can see the parts that Wreden wants you to see. Frustrating sections are skipped so that you can’t even begin to produce your own reading of them. It’s then that you realize that you aren’t really being shown Coda, but rather Wreden’s idealized version of Coda. This Coda is someone that Wreden has made up, a figure put on a pedestal that he claims to know better than we, the player do.

But missing the point, is kind of the point, because it’s possible that there is no point.

Except he doesn’t, and that’s one of the central themes of The Beginner’s Guide. Wreden’s walkthrough of Coda’s word doesn’t provide any new insight to Coda’s motivations. As we, the player, feel like we get to know Coda more, Wreden falls into a spiral of unknowing. He wants to connect to Coda. He wants to understand him. He wants to find meaning in his work. But as the game continues on it becomes more apparent that we are not seeing a window into Coda, but rather of Wreden himself.

This is where you realize another central “plot point” to The Beginner’s Guide. Coda’s work was never meant to be seen by the public eye, never meant to be analyzed. Wreden feels remorse for releasing the work, but does it anyway. Self-describing himself as an addict, he comes off as desperate, as someone who need so badly to find meaning here, who needs so badly to “know better,” to grasp a nugget of knowledge that somehow others just aren’t seeing.

But that nugget of knowledge is also a fantasy. It’s not real.

I want to make something clear here. Coda isn’t real. Coda was never real. He was a fictionalized entity that Wreden made up. In fact, Wreden himself isn’t really the “real” Davey Wreden, but rather a caricature written for the purpose of the game. The game has been out for several months now and we can still find people complaining that what Wreden did, to a fictional person, is unethical. The point, so to speak, was missed.

But missing the point, is kind of the point, because it’s possible that there is no point. I’ve read a lot of reviews about The Beginner’s Guide saying that it’s a struggle with depression, and while I empathize with that, I hesitate to say it. I’ve seen many say it’s about a struggle to find creative validation and while I empathize with that, I struggle to say it. I struggle to say that The Beginner’s Guide is about anything because, it, itself, casts doubt on a deeper meaning of games. Wreden’s walk through Coda’s work doesn’t reveal anything about Coda. Rather, it reveals more about Wreden himself. By looking so deeply into Coda’s work, Wreden only found himself reflected back. He only found what he lacked, and what he wanted.
And perhaps the same can be said for us. We, as players, playing The Beginner’s Guide, are not meant to know more about Coda, or the fictional Wreden, or even the real Wreden. Rather, our analysis of the game reveals more about us, the analyzers, the reviewers.

So is this article really about me? Does the fact that I skimmed over controls and graphics in order to talk about narrative speak to what I care about in the games I play? Are the themes that mentioned simply the themes that I can empathize with? By writing this review, am I really reviewing myself? What review score does one give themselves?

These are the kinds of questions that The Beginner’s Guide leaves you asking, deeply introspective questions with no easy answers. While this review may not get you any closer to those answers, at the very least it can serve to passionately recommend The Beginner’s Guide to you, so that you can experience what I have and ask those questions for yourself.

Bottom Line: The Beginner’s Guide is an incredible art piece of a game that gets you thinking your relationship with the games you play.

Recommendation: The Beginner’s Guide is not for everyone. The gameplay is minimal so if you haven’t liked other walking games like Gone Home, Dear Esther, or The Stanley Parable, then you won’t like this either. But if you are looking for an art piece that really hits you in the emotions, then The Beginner’s Guide is perfect. You’ll never look at a game review the same way again.