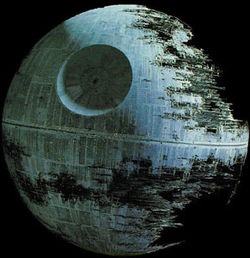 Still, it is definitely doable, provided you are impossibly rich and have easy access to a space transport system, at least according to the calculations of Ryszard Gold, the winner of the name of the year award for 2009. First you’ll need about 1.71 quadrillion cubic meters of steel, or, 134 quadrillion tons. That’s about $12.95 quintillion (I had no ideas these numbers even existed) by modern day prices. Then, you need to get that into your construction site all the way out there in space, which, costs about $95 million per ton, which adds up to $12.79 septillion just to move your metal.

Once you’ve got the materials out there and have built your planetkiller, you need to fill it with air for people to breathe. That’ll require 8.23 quintillion cubic meters of nitrogen and 1.65 quintillion cubic meters of oxygen. Add that all up and you’ve got a total shipment cost of $.281 septillion and $212.46 quintillion, and which brings us to a grand total of $15,602,022,489,829,821,422,840,226 and 94 cents. Which is 1.4 trillion times the current US debt and 1.11 trillion times the current amount of money available in the world, according to Gold.

So I guess it really isn’t possible…yet. If you do happen to ever have that much money, though, keep in mind that these figures only apply to a bare-bones budget model Death Star. So no plush seats or weird creepy booth where Darth Vader gets his helmet taken off and takes a bath or whatever. And probably about a million thermal exhaust ports that punk Rebels can use to blow up your Death Star. Stupid kids, don’t you know how much one of these things costs?