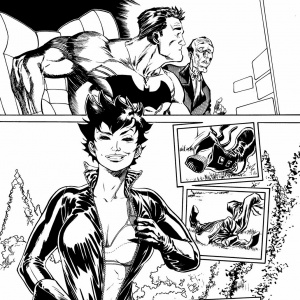 We don’t always get to see just how the comic book sausage is made. But over on his blog, artist Guillem March is giving us a rather compelling glimpse of the process via pages he drew for Catwoman #3 and #4 back in 2011.

The original scripts for these issues had Catwoman figuring out that Bruce Wayne and Batman were the same person from the way they kissed. She then rides her bike to Wayne Manor and strips buck naked to tease him via his security feed. While it is a bit porntastic, the pages were apparently intended to advance Catwoman’s character development. As March puts it, “The action in this scene was a depiction of who Selina was: a woman taking advantage of her sexuality to get something from a man. That made sense according on how the character had been approached in the earlier New52.”

Her ploy doesn’t quite work, because Batman isn’t going to hump a known criminal committing indecent exposure on his lawn. It isn’t Gotham City, Florida, amirite? But it establishes that she has something big to hold over Batman’s head, and it might have taken the series to some interesting places. Alas, soon after turning these pages in, March was asked to redraw them thanks to significant last minute changes to the script – this issue ended up being about Selina coping with the death of her friend Lola instead.

That’s a rather huge change, though March was happy to do the extra work since he was paid extra. But he lightly speculates that DC might have been turned off, ahem, by the racy content more than the need for a new story. “I got an explanation about why DC wanted to change the story,” he says, “but I guess it all have[sic] to do with the sexy depiction of Selina in these original pages.”

To be honest, context-free these pages just seem like titillation for the sake of titillating, especially considering that March is the artist behind the infamously terrible cover of Catwoman #0. Perhaps in the wake of that controversy, DC wanted to keep a closer eye on what was being done. Sure, these issues were written by Judd Winick, and given his track record, I’m inclined to assume the final story, had DC used it, would have been far less blatantly pandering. But I have to admit that, for once, I think DC’s last-minute meddling with the creative team might have done better service to the character.

For what it’s worth, March isn’t happy with his work on these pages either; he mainly revealed them this week because, as he says, he doesn’t like working on something that isn’t used. “I must confess I don´t like them at all,” he says. “I don´t like how Selina looks like when she´s naked. Both the body and the face. I´d like to think today I´d do a much better job, and a bit more classy.”