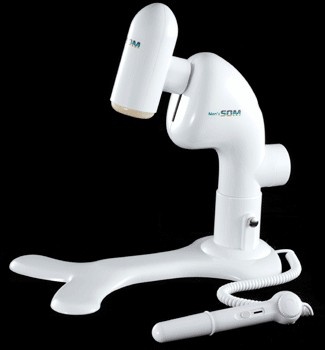 Straight from Japan (naturally) comes the SOM, the ultimate convergence of technology, pornography and those long, lonely winter nights in February.

Despite its appearance, this is not a kitchen appliance, unless you happening to be cooking in the kitchen of love; this is, in fact, a solo sex machine that connects to your PC via USB port, offering hands-free operation and complete control over the device’s various functions. The SOM comes in three flavors: Men’s, Lady’s and Petit, which is actually a scaled-down, portable version of the men’s device. The naughty bits in each SOM are made from “septon,” a new material which the company claims “is so safe that [it is] used in medical service,” and the manufacturer is so certain of your “super-satisfaction” that they guarantee maintenance of the device absolutely free.

To find out more about the SOM – for strictly academic purposes, of course – check out the manufacturer’s amusingly Engrish website at somjapan.com; you can also read about Cross Days here, but only if you’re fluent in Japanese. Ah, Japan. Is there anything you won’t do?