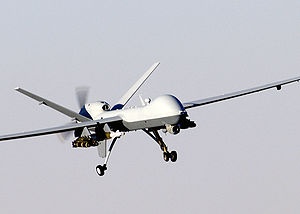 The US military put down a rogue robot last week when a deadly unmanned aerial vehicle went out of control, forcing the Air Force to shoot it down.

The world had a close call with the inevitable robot uprising last Sunday. Things were going smoothly on a combat mission in Afghanistan when an American Reaper MQ-9 – an autonomously controlled unmanned aerial vehicle (yes, a UAV just like in Call of Duty 4) capable of destroying tanks and buildings – suddenly went out of control.

“The aircraft was flying a combat mission when positive control of the MQ-9 was lost,” USAFCENT Public Affairs reported. “When the aircraft remained on a course that would depart Afghanistan’s airspace, a US Air Force manned aircraft took proactive measures to down the Reaper in a remote area of northern Afghanistan.”

The Reaper was taken down and crashed into the side of a mountain. Nobody was injured.

A simple malfunction, perhaps, or possibly evidence of something more sinister? Details are scarce, though it seems like the Reaper was controlling itself and wasn’t being piloted remotely when it started to veer off course. In any case, that’s one fewer Reaper for the Air Force (they only have 27 now) and some $10.5 million down the drain. That’s quite a bit of money to lose, but no price is too high when it comes to staving off the cyber-apocalypse.

[Via The Register]
View Forum Comments