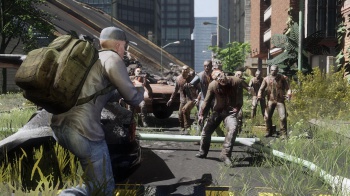 A new build of the game is available for purchase, with a less “misleading” description.

On December 17, 2012, Hammerpoint Interactive released an open-world zombie survival game called The War Z on Steam. The next day, Valve pulled the game from its store in response to overwhelming accusations of false advertising, with players reporting that the game was dramatically different from what its bullet points claimed it was. Now, more than two months later, the game has resurfaced on Steam with an updated build and a less impressive description.

Valve vouches for the new version of the game in a brief statement asserting that “Valve and Hammerpoint Interactive collaborated to address community feedback, update the Steam store page, and make the title available for purchase worldwide.” The store page has indeed been tweaked in several ways to better reflect the true status of the game. Gone is the false claim of “Up to 100 Players per Game Server,” as well as the bullet point labeling the game as “Single Purchase” – while the game could be played after one purchase, the in-game economy relied heavily on microtransactions. Likewise, the page no longer makes claims of “areas between 100 to 400 square kilometers,” and has dropped any mention of skill trees, private servers, and friends lists. On the numerically accurate side of things, the page now shows The War Z‘s Metacritic rating: 23/100.

A patch has been released to update the game for those who already bought the game, while new buyers can choose from three prices that include varying amounts of in-game currency. Valve offered a refund to unhappy customers who paid for the original release; now that a more accurate edition of the game is up for sale, that offer has concluded.

Hammerpoint initially claimed that players had misread their totally valid information, but it seems they’ve learned that the best way to avoid accusations of false advertising is to only advertise for features that are actually in the game. As for the future of The War Z, it’ll be tough to earn the gaming community’s forgiveness after the disastrous initial launch, but at least the developers are attempting to correct their mistakes.