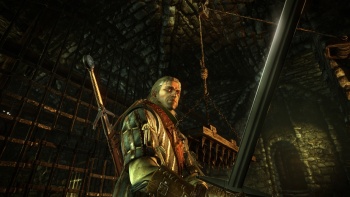 Witcher 2 developers CD Projekt continue to set a great example of how to support and update a release with a glut of improvements for their flagship title.

Going live on September 29th, the upcoming update for The Witcher 2: Assassins of Kings upgrades the game to version 2.0, includes over 40 under-the-hood tweaks and adds a few very welcome features.

The biggest improvement, at least on paper, is the addition of a proper tutorial. Many players struggled with the opening segments of the game, which see albino-playboy-cum-monster-hunter Geralt taking part in a series of increasingly frantic battles, culminating in a mano-a-garra slugging match with a dragon the size of jumbo jet. This, you understand, was the tutorial. After the update, players will get to perform a few perfunctory quests in a remote village in the forest before the story begins, allowing them to get to grips with the game’s controls without the constant threat of fiery death.

Now for those who are actually quite fond of fiery death, the update also adds a much-more difficult “Dark Mode.” As well as sounding kind of rad, Dark Mode adds various darkness themed goodies, including three sets of armor, three new swords and new quests. The mode is apparently going to be so difficult that CD Projekt is offering a mystery (thus far) prize to the first sap with enough free time and determination to beat it.

Finally there’s the Arena Mode. A separate experience from the main campaign, it sees Geralt, and a number of mercenaries, fighting a parade of monsters for the enjoyment of a bloodthirsty audience. The battles are timed, and the crowd will respond to your performance, cheering for quick and gruesome kills, or chucking various rotten vegetables at you if you’re a bit crap.

The update is free for current Witcher 2 owners and will be applied automatically when you start up the game on the 29th. New players will be able to pick up a boxed version of the game, complete with the 2.0 updates for a new reduced price. The upcoming 360 “adaptation” will also feature the 2.0 content.

While the free updates are certainly welcome, I can’t help but feel sorry for those who’ve already battled their way through the now antiquated versions of The Witcher 2. Luckily, I never got very far in the game because I couldn’t get past the bloody dragon I was busy with other, great titles.