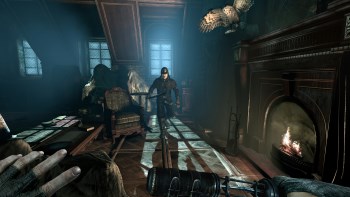 Stephane Roy says Thief will employ QTEs and bullet-time in combat sequences because the swordplay of the original games just doesn’t work anymore.

Combat in the original Thief trilogy was generally something to be avoided. Killing was always best done from the height and distance afforded by an arrow (although true pros don’t kill in the first place), and while your sword could occasionally prove handy against a spider or a zombie, if you found yourself swinging it at a guard you were more likely than not in very deep trouble.

But that kind of thing just doesn’t fly anymore, according to Roy, who said the studio playtested the original combat and found that it’s just too far out of date. “I don’t know if you remember with the previous game? Let’s say I’ve been detected; it was really, really tough to survive. You know? It was unforgiving,” he said. “Game over.”

The tricky part for Eidos is that Garrett is a thief, not a soldier, so while they don’t want him to be helpless in a fight, they’re not interested in turning him into a killing machine either. Thus the new combat system, which he said is a “fair balance” that will focus on escape rather than victory. “Don’t try to kill them, just try to push them or make sure they are disabled,” he said. “Don’t finish the job, just get the fuck out.”

He acknowledged that the new system still needs work but insisted that the change is necessary, and for the better. “How we used to play games ten years ago and how we play games today is different,” he said. “So that’s why we are supporting this new way to play.”