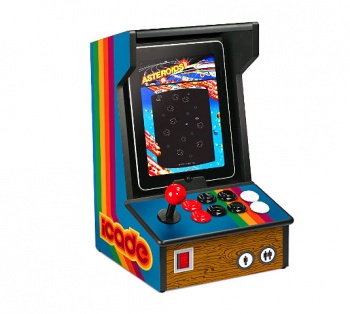 At this point, we should just assume that every April Fool’s joke from ThinkGeek is coming true.

Last year, nerd consumer products website ThinkGeek ran a facetious listing on April 1st for an iPad peripheral that approximated an old arcade cabinet. The iCade worked by sliding your iPad into a slot that connected with Apple’s proprietary connector to provide a joystick and buttons on par with a Donkey Kong. Well, following in the footsteps of the Tauntaun sleeping bag and Canned Unicorn Meat, ThinkGeek announced at the Consumer Electronics show that it has partnered with Atari and electronics manufacturer Ion to make the iCade a real product. This time though, the iCade communicates with the iPad via Bluetooth and offers 8 different button inputs. The joke page pegged the retail price of the iCade for $150 but the real iPad peripheral will only set you back $99.99. The iCade is in production now and ThinkGeek says it will be available Spring 2011.

Teaming up with Atari was a genius move, as they can supply many of the games that exemplified the arcade era. Right now, the game shown is Asteroids but ThinkGeek promises that it will release the API so that other developers can write games that can be used with the iCade.

I myself don’t own an Apple product, and probably never will succumb to the temptations of that cult, but the iCade seems like it makes sense.

What do you think, iPad owners? Would you buy a $100 peripheral to play arcade games on your desk?