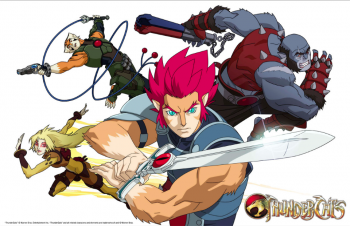 It’s a new look for the Thundercats, one more in keeping with the new century they find themselves in.

Todd Casey, one of the writers for the upcoming Thundercats reboot, has tweeted the first official image from the show, giving us a look at how the eighties cartoon classic has been updated for 21st century. The image shows four of the six main Thundercats characters, with only the twins WilyKit and WilyKat missing.

Attendees at the London Toy Fair also got a chance to see some of the characters who aren’t in the picture. Apparently the remaining two Thundercats have received complete redesigns, while the villainous Mumm-Ra – who can infuse his withered, mummy-like form with energy borrowed from evil spirits – remains quite similar to his previous incarnation.

The new Thundercats series is scheduled to debut on Cartoon Network at some point this year. According to spokespersons for the channel, fans of the old show will enjoy it a great deal.