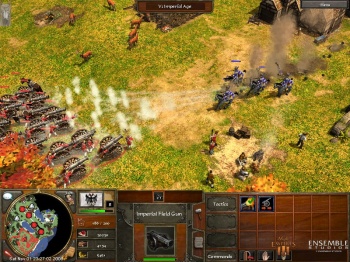 Think you can spare a dime for a lengthy real-time strategy game?

The age of digital distribution has brought one major advantage for consumers: Games can be sold for a fraction of their regular prices. In the case of Age of Empires III on the newly relaunched Games for Windows marketplace, Microsoft is going one step further and selling the game for a fraction, of a fraction, of the price.

In the final day of its daily deal program to celebrate the relaunch, the Games for Windows marketplace is offering Age of Empires III: Complete Edition for just 10 cents. This includes the original game and both its Warchiefs and Asian Dynasties expansion packs for 0.25% of the regular price of $39.99, but only until the end of the day. Age of Empires III is a real-time strategy game where players must raise their colonial era settlement into an empire by gathering resources, building structures, and battling against rival factions.

You don’t have to be a member of Mensa to see that this is a good deal. I think I even already own Age of Empires III, but I bought it again, which is admittedly what Microsoft probably wanted to draw consumers into the new Games for Windows store. You can use Microsoft Points to pay for the game if you don’t want to use a credit card, but it’ll cost 10 Points for an increased cost of 12.5 cents. Buyer beware: I don’t want to see anyone in the poorhouse over this.

All week, Games for Windows has been offering daily deals that included BioShock for $1.99 and Saint’s Row 2 for $5.99. With Amazon revealing its core games downloads initiative and now Microsoft also re-entering the digital sales floor, it’s starting to look like it’ll be hard to keep track of all the great digital deals out there.

You can become a dime poorer by picking up Age of Empires III until the end of the day here.