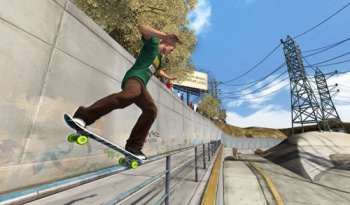 Tony Hawk loves Tony Hawk: Ride, but reviewers do not, and he’s not about to take their nonsense lying down.

Tony Hawk has spoken out against reviewers that he says gave Tony Hawk: Ride poor scores unfairly. Tony Hawk: Ride, which costs $120 and comes with a skateboard controller peripheral, is averaging about 50 out of 100 on Metacritic across all three platforms it is available on. This does not sit well with Mr. Hawk.

One of Hawk’s Tweets reads: “Most snarky critics had their minds set before ever seeing/playing the game. I’m proud of what we created; it’s innovative, responsive & fun.” In a recent interview, Hawk said: “They were ready to discredit it before they even tried it, and if it didn’t play exactly how they imagined it… then they passed it off.” He thinks that reviewers went into Ride with the wrong attitude and that’s why they hate it.

What Hawk has to realize is that when one reviewer tells you you’ve made a piece of crap, it could be that one person’s opinion. When everybody tells you you’ve made a piece of crap, as is pretty much the case with Tony Hawk: Ride, well, then maybe you did. Hawk could just be in defense mode, trying to put some positive press out there for a product that has his name on it. On the other hand, Hawk says he’s been working with Activision every step of the way and is “very proud” of Tony Hawk: Ride.

Hawk might be proud of his baby, but he might want to open his eyes a little to the reality of the situation. Many criticisms that I’ve read have all echoed the same complaints: collision is buggy (with your character sometimes falling through the world), and the skateboard controller is frustrating. The game is an interesting idea conceptually, but it doesn’t look like Tony Hawk: Ride pulled off its goals as much as Tony Hawk himself seems to believe it did.