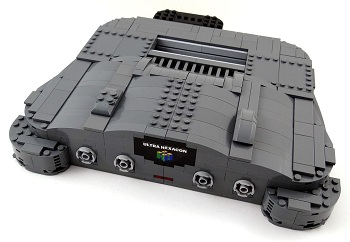 Lego artist Julius Brunk has created a custom set of transformers based off of the Nintendo 64.

The Nintendo 64 was a great console. In fact, with a library including games like Super Mario 64, GoldenEye, Star Fox 64, Ocarina of Time and Mario Kart 64 (best in the series!), there’s a case to be made for the N64 being one of the best Nintendo consoles of all time. But we digress, that is a matter for opinion and we deal strictly in facts. For instance, it’s a fact that Legos and Transformers make everything better. Point in case, Julius Brunk (a.k.a. Baron von Brunk), whose works also include a transforming Game Boy, Game Gear and NES Zapper, recently an N64 transformer out of Legos and it’s probably the coolest thing we’ve seen in awhile.

Brunk’s transforming N64 set includes the console, its controller and two imitation cartridges based off of GoldenEye and Donkey Kong 64. It also comes with an “Ammo Magazine Plus” pack that fits in the back of the controller a la the memory cards of old. Each piece of the set transforms into its own unique robot with its own name. The Donkey Kong 64 cartridge becomes Mecha-Kong while the GoldenEye cart is Hot-Shot. The controller, in turn, transforms into a scorpion named Tetragon, while the N64 itself becomes Ultra Hexacon.

According to Brunk, no third party custom pieces were used and “every single piece in these toys are 100 [percent] LEGO.” Every robot in the set, with the exception of Tetragon’s cord, can also transform without detaching any pieces. Brunk’s original concepts also included robots based off of Cruis’n USA, Star Wars: Shadows of the Empire, Star Fox 64, Pilotwings 64 and Chopper Attack, but these ideas were eventually scrapped. He also built an Ocarina of Time cartridge that transformed into a robot Link, but opted to exclude it from the end photo shoot due “errors with his size and sticker placement.” Even without it though, this set is something Brunk should be proud of and one that’s sure to delight Nintendo fans everywhere.