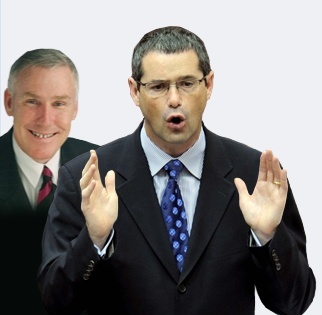 Get ready to Ban This Game, a goofy little exercise in frenetic mouse clicking that shines yet more light on the plight of gamers in Australia.

Created by Conor O’Kane, an independent game developer living in Melbourne, Australia, Ban This Game is a simple quickie in which players click on game boxes and websites as they come flying across the screen. But there’s a catch: They can only be clicked once they near the bottom of the screen and, with each click bouncing them up like a Pong ball, they must be clicked three times before they’re banned. The concept is simple enough but with dozens of boxes bouncing all over the place and “Yakety Sax” blaring away in the background, the pace becomes rather frantic.

It’s entertaining in small bites – rounds last about 45 seconds – but Ban This Game is obviously more about getting attention than about providing a solid gameplay experience. At the end of the game, a “tell me more” option provides interesting tidbits about the deplorable state of videogame ratings in Australia. Most of it will already be familiar to regular readers but for those unaware of the country’s heavy-handed approach to censorship, it could be a bit of an eye-opener.

But there’s also enough stupid fun here that I’ve played it at least a dozen times and will almost certainly hit it again a few times before I give up once and for all. My high score currently stands at 20 points; Michael Atkinson seems pretty happy with it but Stephen Conroy looks unimpressed. Think you can do better? Get a copy for yourself at banthisgame.com.