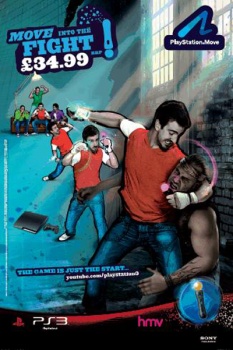 A poster advertising the PlayStation Move has been banned in the U.K. after the Advertising Standards Authority received complaints that it was too violent.

The ad in question shows a snappily-dressed chap in three different fighting poses, the last of which includes a pained-looking ruffian in a headlock who’s about to eat a knuckle sandwich, or possibly a Move wand. Whatever the case, people complained and the ASA dropped the hammer.

Don’t get the idea that there was some roiling tsunami of outrage against the ad, however. A grand total of eight people submitted complaints, two of which actually accused it of condoning racist violence because the attacker appears white while the victim is black. But eight was enough for the ASA, although it rejected the accusations of racism, saying that while the two brawlers had “slightly different skin tones,” there were no actual undertones of racial violence.

Eight complaints may not sound like many but as the ASA points out on its website, it has the power to act even on just one. “We don’t play a numbers game,” the site says. “Our concern is whether the Codes have been breached. Of course, sometimes the number of complaints received can have an impact – this is particularly the case when we are considering matters of taste and decency.”

Sony U.K. told Campaign that the ad was intended to advertise the Move controller, not any particular fighting game, and that it had “taken steps to ensure that the images were not graphic.” Nonetheless, the ASA has made its decision and the ad may no longer be displayed in the U.K. in its current state.