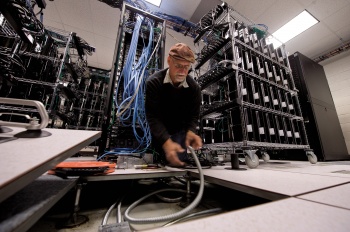 The Air Force plays Call of Duty on the most powerful game console in existence.

The United States Air Force Research Laboratory has completed what it calls the Condor Cluster, a supercomputer made entirely of PlayStation 3 consoles. The Condor Cluster, housed in Rome, New York, reportedly has capabilities heads and tails above every other interactive computer in the Department of Defense.

Made of 1,760 PlayStation 3 processors and 168 general purpose processors, the Condor Cluster provides extreme power for its relatively low cost. It has the ability to calculate 500 trillion floating point operations per second (TFLOPS), but was made for $2 million thanks to the cost of the PS3. Mark Barnell, director of the Air Force Research Laboratory’s High Power Computing division, says this is “a cost savings of between 10 and 20 times for the equivalent capability.” It also uses 1/10 the power of a comparable supercomputer, apparently making it “green.”

The Condor Cluster is not the fastest supercomputer in town, with the big boys currently able to compute a couple of quadrillion FLOPS, but it’ll still be useful to the military. The entire Department of Defense will have access to the Condor Cluster on a shared basis, and it is predicted to be used for “neuromorphic artificial intelligence research, synthetic aperture radar enhancement, image enhancement and pattern recognition research.” These are likely codewords for “so the U.S. government can look through your window more easily.”

The Air Force will cut the ribbon on the Condor Cluster today, December 1, 2010, making it open for computational business. The Condor Cluster might be a modern marvel of cheap supercomputing technology, but the Air Force was troubled by Sony’s choice to remove the option to install Linux in a firmware update, making it harder to find replacement systems should a console break. If you’ve got an unboxed PS3 “Phat” laying around, keep the old firmware on that puppy and the U.S. military might make you an offer someday.