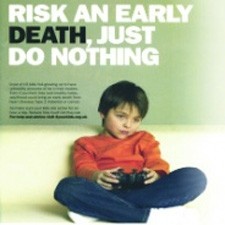 A British ad campaign linking early deaths and young gamers has drawn heavy fire from game developers and gamers in the UK and beyond.

The advertisement, which appeared this morning in women’s lifestyle press titles such as Star, Reveal and Heat, shows a young boy holding a PlayStation controller and leaning up against a wall with a bored look on his face. The picture is accompanied by the caption: “Risk an early death, just do nothing.” The ad comes as part of the Change4Life campaign, a push by the The British Heart Foundation, Cancer Research and Diabetes UK to combat what they see as an increasingly sedentary lifestyle spurred, in part, by the increasing popularity of electronic gaming.

Needless to say, the campaign has sparked outrage. The Market for Computer and Video Games UK has lodged a formal complaint with the Advertising Standards Authority, calling the ad “unfair and inaccurate.” The MCV UK issued a further statement calling on gamers and people in the industry to join in protesting the campaign.

The main argument of the MCV UK is that not only is the advertising campaign inaccurate, wrongfully demonstrating the effect of games on youth, it also implies that parents should not buy games for their children, potentially hurting the already-suffering UK games industry. Earlier in the week, a survey published by TIGA found that UK-based developers were already frustrated by what they saw as the government not doing enough to encourage and aid the growth of the industry compared to their counterparts in other countries.

Furthermore, as Tim Ingham, MCV’s Associate Editor argues, this generation of gaming is far more interactive and healthy than previous generations, resulting in a less sedentary and more interactive lifestyle than just, say, watching TV: “Not only have they got the UK’s idle, McDonald’s-munching youth actually keen to break a sweat – but, more importantly, they’ve helped them have a genuine giggle with their parents for the first time since
‘peek-a-boo!’ in the pushchair.”

As of yet, there has been no response from the UK government or any of the groups involved in the Change4Life campaign.