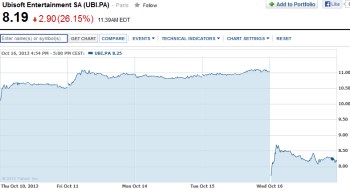 Ubisoft’s share price has tumbled more than 25 percent, driven down by the Watch Dogs delay and “underperforming” Splinter Cell and Rayman releases.

Ubisoft dropped some unexpected bad news yesterday with the announcement that Watch Dogs, planned as a launch title for both the PlayStation 4 and the Xbox One, was being pushed back to sometime in the spring of 2014, along with upcoming racing game The Crew. That was followed by a revised financial projection that saw Ubisoft adjust its sales expectations for the 2013-14 fiscal year downward by about a half-billion bucks, and today, not entirely surprisingly, the company’s share price has been appropriately pummeled.

The Paris-based company closed yesterday at €11.09 and opened today at €8.01 before climbing to €8.19 at the time of writing, a drop of more than 26 percent. In a conference call to investors, Ubisoft CFO Alain Martinez revealed that the delays of Watch Dogs and The Crew aren’t the publisher’s only troubles, as neither Splinter Cell: Blacklist nor Rayman Legends have performed as well as expected.

“As we have said we have experienced lower sales than we anticipated when we gave our targets,” he said. “Already released games such as Splinter Cell, Rayman and others.” He did not provide specific numbers.

Losing Watch Dogs and The Crew for the current fiscal year will provide Ubisoft a potentially big boost for 2014-15, but it’s hard to imagine that they’ll have the same impact: Missing the holiday quarter and the opportunity to be a PS4/Xbox One launch title is bound to diminish sales, quite likely to a significant extent. On the other hand, it’s unlikely that Ubisoft is facing any kind of existential peril, so if you’ve got a few bucks kicking around this might not be a bad time to get in.