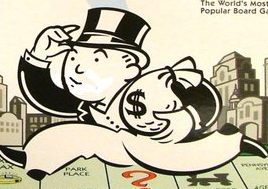 The deal is for current and next generation console games.

“Hasbro makes games that we all know and love,” says Ubisoft’s Tony Key, “and we’re thrilled to be able to work with them to create video game experiences based on some of their most popular brands.” Ubisoft is to make current and next generation console versions of some of Hasbro’s most recognizable titles, including Monopoly, Scrabble (US and Canada only), Trivial Pursuit, Risk, Battleship and Cranium. There are already PC, Mac and mobile versions available of many of Hasbro’s titles available via Electronic Arts, but Hasbro chose to go with the Assassin’s Creed developer for its console titles.

“We look forward to collaborating with Ubisoft to offer consumers innovative new ways to experience their favorite gaming brands,” says Hasbro’s Mark Blecher. Hasbro’s experiments with video gaming have earned a modest amount of cash, and gaming revenue increased 19% in Q2 2013. Even so, Hasbro has yet to really get its gaming feet wet; it seems to prefer odd experiments, like its partnership with Zynga to make board games last year.

Look forward to building hotels and going bankrupt on your Xbox One sometime next year. I wonder if the Cat will make an appearance, or if the Iron will sneak its way back onstage?