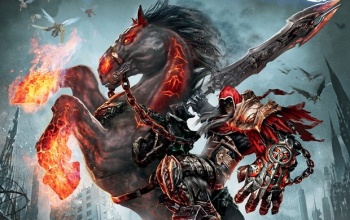 Vigil Games wasn’t purchased in the THQ auction, but it may be saved anyway.

Update: A representative from Crytek got back to me to say the new studio will not make another Darksiders game. “Crytek USA won’t work on a new Darksiders game. At this point in time it is too early to share any future plans,” said Jens Schafer from Crytek. It doesn’t look like Crytek has any interest in acquiring the IP from THQ. He also confirmed the 35-member team led by Adams consisted entirely of former Vigil Games employees.

Original post: One of the surprises in the THQ firesale last week was Vigil Games not finding a buyer. No entity placed a bid on the studio, despite developing a strong franchise in Darksiders, and all of its employees were laid off. Thankfully, it looks like the studio will be reborn. Today, the German game developer and publisher Crytek – makers of the Crysis games – announced it was forming a new studio in Austin, TX. The new studio is called Crytek USA Corp, and will be run by David Adams, the former head of Vigil.

“I’m thrilled to be a part of the newest Crytek studio, which will boast some of the brightest development talent in the industry,” Adams said in a statement. “The studio’s launch represents Crytek’s commitment to delivering diverse and high quality content to players everywhere.”

Crytek CEO Cevat Yerli chimed in with some thoughts on how Adams will be keeping his team together. “We are extremely excited about the work that we will be undertaking from our strategic new location in Austin, with David Adams and his team of 35 experienced developers,” Yerli said.

Great news for Vigil, at least the core team: goo.gl/LaQKt Thanks to Crytek for saving as much as they could of a fantastic team.— Jason Rubin (@Jason_Rubin) January 28, 2013

So, Vigil Games is dead; Long live Crytek USA Corp. I’m not positive about the legal wranglings, but it appears Crytek hired back the employees of Vigil Games to form this new studio. There’s no word on what game the studio will work on next, but it will apparently use the CryEngine.

I’ve reached out to Crytek to clarify the status of the Darksiders IP. Jason Rubin said THQ would attempt to sell the remaining intellectual property off, and according to another Tweet from Rubin, the IP is still up for grabs. I wonder if Crytek will attempt to snatch it up when it goes on sale.