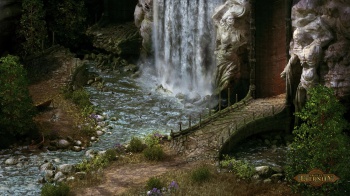 When Obsidian announced Project Eternity with promises of old school isometric RPG gameplay in the same vein as Baldur’s Gate and Planescape: Torment, the floodgates opened. The game reached its initial funding goal of $1.1 million within 24 hours. Today, Project Eternity has achieved a new goal – it is now officially Kickstarter’s most-funded videogame.

The claim for the most money raised was previously held by Tim Schafer’s Double Fine Adventure, which managed to amass $3,336,371 in just over a month. As of writing, Project Eternity edges past with $3,432,157, backed by more than 66,000 sponsors, and with 14 hours to go.

The project has had no problem accomplishing its 12 additional stretch goals in the past few weeks. As a result, backers will be rewarded with additional races, classes, regions, factions, language translations, player houses and strongholds. The game also features a “mega dungeon” that has since grown to 10 levels, with more levels unlocked for every 2,500 backers to the project.

That’s a fair amount of content, but there are still additional funding tiers to be met. The next stretch goal reward will be “Big Big City 2”, similar in size to Baldur’s Gate and Athkatla from Dungeons & Dragons, as long as the project’s funds reach $3.5 million (which, at this rate, is not entirely out of the question).

Obsidian revealed Project Eternity on Kickstarter back in September this year, claiming that it has been “almost impossible” to achieve funding for the game through traditional means.

Update: Project Eternity has since passed its $3.5 million goal, finishing at $3,986,929 in Kickstarter pledges alone. As a result, “Big Big City 2” will be included as part of the game’s finished content.

Also, the article previously mentioned that the game broke the $1 million mark in a matter of days; it was actually done in less time that that. Apologies for the error.