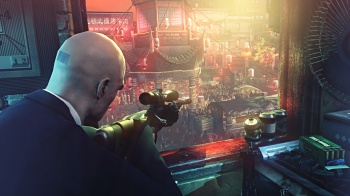 An app promoting Hitman: Absolution is sure to spark some controversy.

Like communism, some ideas work well on paper and tend to falter when it comes to real-life implementation. Take the latest ad campaign for Hitman: Absolution, for example. The game features a remorseless assassin taking out targets in a brutal but efficient manner, so a social media campaign in which you can “assassinate” your friends does make a modicum of sense. However, the Hitman: Absolution Facebook app that materialized may have gone a bit too far. The program allows you to put a hit on a friend, for reasons including “bad fashion sense” and “cheating on her partner,” then customizes a video for your target that shows Agent 47 putting a sniper round through his or her skull.

The app itself is fairly simple: Select a target from your list of Facebook friends, choose an identifying feature that he or she possesses, then specify a reason why he or she deserves to shuffle off this mortal coil. The appearance descriptions and justifications range from the simple (“her shortness;” “she’s on Facebook far too much”) to the bizarre (“his silly moustache;” “he supports a crap football team”) to the borderline offensive (“her small tits;” “she works at a job she hates”).

While the unfortunate victim has to agree to let the app access his or her personal information in order to view the video, the resulting ad takes full advantage of whatever it’s been given. The Hitman: Absolution app uses a profile picture to show Agent 47 stalking the target, announces birth date and relationship information to identify him or her (I got “romantically unattached, for obvious reasons”), and finishes with the titular hitman firing a sniper rifle right after a montage of additional photos.

To recap: The Hitman: Absolution app makes it possible to send a death threat to a small-breasted Facebook friend for cheating on her spouse, or suggest that a lazy friend identifiable by his big nose should get one right between the eyes. The idea behind it is understandable, given the nature of Agent 47’s work, but it’s not over-the-top enough to be an outright joke, and Hitman‘s protagonist tends to target crime bosses and enemy spies, not fashion victims. Expect to see some controversy following this app in the days to come.

Update: The app, formerly located at hire.hitman.com, appears to redirect to the main Hitman: Absolution website now. At present, there is no way to access the program.

Update: Following the removal of the app, Square Enix issued the following statement.

Earlier today we launched an app based around Hitman: Absolution that allowed you to place virtual hits on your Facebook friends. Those hits would only be viewable by the recipient and could only be sent to people who were confirmed friends.

We were wide of the mark with the app and following feedback from the community we decided the best thing to do was remove it completely and quickly. This we’ve now done.

We’re sorry for any offence caused by this.