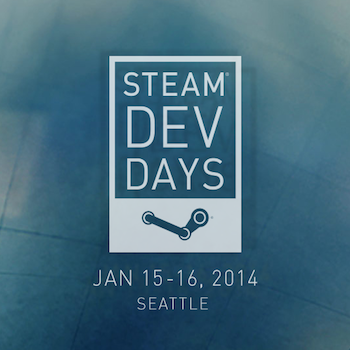 Steam Dev Days lets Valve get feedback from developers in a “relaxed, off the record environment.”

Valve will host a conference, “Steam Dev Days,” to give developers some hands-on time with their upcoming Steam hardware in Seattle next January. The event, running from January 15-16, will give game-makers the chance to “test-drive” Steam OS, Steam Machine prototypes and the Steam Controller, and give their feedback directly to the Steam development team.

When they aren’t giving Valve notes, attendees will have the chance to participate in roundtable discussions and attend lectures about a wide variety of Steam-friendly topics like Linux/OpenGL, VR, etc. There’s no word on who will be speaking at the conference – Valve is currently taking submissions for speakers – but the site will be updated as more information becomes available.

We’d love to tell you we’ll be getting out first look there, too, but it seems “Dev Days” will be an “off the record” affair. They aren’t looking for volunteers, either. Developers who have received a registration code can able to reserve their spot at the conference for $95. After October 25, registration will be handled on a first-come, first-serve basis.