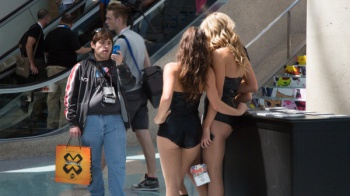 Booth babes are everywhere, but it turns out that they’re actually not very good at what they’re supposed to do.

Booth babes. A lot of people don’t like them, but go to just about any kind of trade show and there they are, drawing your attention to the latest videogame, sports car, big-screen television or machine gun. (Seriously, check this out.) They’re ubiquitous, and they show no sign of going away anytime soon – but do they actually work?

According to veteran marketer Spencer Chen, they do not, and he tells a pretty good tale to prove it. A couple of years ago he stumbled upon an opportunity to test his belief that booth babes are “anchors” by staffing two booths for the same product at the same show very differently: One with “professional booth babe talent” and the other with contractors from the local area who brought more to the table than just physical attractiveness. He was initially alarmed by the reps provided for the second booth – “They weren’t just older than your typical booth babe, one was literally a grandmother,” he wrote – but the results spoke for themselves.

“The booth that was staffed with the booth babes generated a third of the foot traffic (as measured by conversations or demos with our reps) and less than half the leads (as measured by a badge swipe or a completed contact form) while the other team had a consistently packed booth that ultimately generated over 550 leads, over triple from the previous year,” he wrote. “Everyone on the team was genuinely surprised by the results but duly convinced. It was like showing some hardened sales reps a new golf swing.”

Chen said he was able to duplicate the results at other events over the course of the year, a rather important part of his “proof,” and also noted that booth babes aren’t just ineffectual but can actually be detrimental: Many attendees find their presence intimidating and the ones they do attract “were always the overconfident weirdos.” Most objections to booth babes are based on the sexism inherent in the role; perhaps Chen’s observations will offer a more practical reason for doing away with them, and be more successful in making it happen.