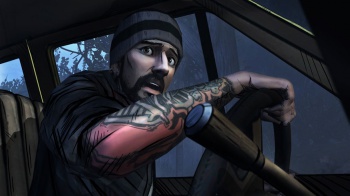 If you bought The Walking Dead: Season 1 on the Telltale store, 400 Days will be a free download.

The first piece of downloadable content for Telltale Game’s critically acclaimed The Walking Dead adventure game comes out this week for the PC, Xbox 360 and the PS3. It should be out now on PSN, will be out tomorrow for PC users, and Xbox 360 gamers should see it pop up on Friday. The iOS version comes out next week, and PSVita owners will have to wait until August. Better still, if you bought The Walking Dead: Season 1 on Telltale’s official store, 400 Days will be a free download, as a thank you from Telltale. This offer extends to any future purchases of Season 1.

For those of you expecting to to see Clementine or Lee return, bad news, 400 Days is split over 5 short stories; with each presenting the apocalypse through the eyes of a different survivor. The reasoning behind this is that the creators wanted to provide a different perspective on the world of The Walking Dead prior to Season 2 beginning later this year and provide interesting ‘connective tissue’ between the two seasons.

You’ll be able to purchase 400 Days from within a special in-game store inside the base Walking Dead game. Telltale have put together an F.A.Q if you have any further questions.

Diablo III Console Version Makes it Easier to Get Loot