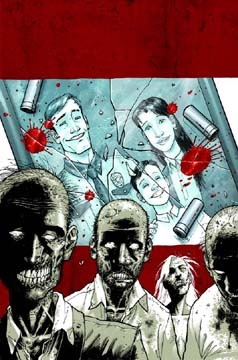 Robert Kirkman’s blockbuster zombie comic book series The Walking Dead was known to be under consideration for a television adaptation, but today AMC officially confirmed that it’ll be coming to the network in 2010. Six one-hour episodes are planned to start airing in October.

How can I express my feelings on this plainly. I would have eliminated a continent full of children to see a Walking Dead television series made. Thankfully, now I can dismantle my nuclear arsenal.

Why should you care? The Walking Dead has been running since 2003 and with 70 or so issues released it’s simply the greatest zombie story ever told. Dawn of the Dead is a great movie, but it’s over in two hours. The Walking Dead‘s premise is a tale of a zombie apocalypse that doesn’t end. While it has its share of undead gore, everything The Walking Dead does is smart and often surprising. It’s penned by comic veteran Robert Kirkman, who serves as executive producer on the television show, and is currently illustrated by Charlie Adlard.

The Walking Dead primarily follows ex-cop Rick Grimes as he attempts to deal with a world overrun by zombies. Fear not, as these zombies are the slow-moving variety, but they will still chomp an arm off if you let them. Rick, his family members, and newfound friends try to find stability in their dangerous world, but are often forced to do the unthinkable and personally changed in ways that can never be repaired. Nobody is safe in The Walking Dead, and Kirkman has hinted that he might even kill off Rick someday. It’s not just a great zombie tale, but a great comic in general.

According to Kirkman, the television series may not be a direct adaptation and will still hold surprises for fans. AMC handled Madmen and Breaking Bad pretty well, so I’m looking forward to another amazing series here. I have a problem with AMC only ordering six episodes for a zombie story that is never supposed to end, but that’s the state of television today. If you all watch it, like I know you will (or I will come and find you), we will likely see more.

Zynga and the Rise of the New Gamer