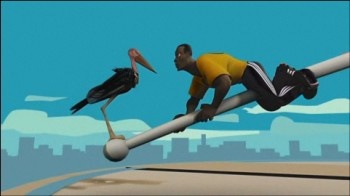 Warner Bros. Interactive Entertainment is launching a free new multiplayer PC game in Kenya as part of a coordinated effort to help fight the spread of HIV.

The Partnership for an HIV-Free Generation combines private industry, NGOs and the public sector in an effort coordinated by the U.S. government through the President’s Emergency Plan for AIDS Relief. Corporations that have joined the partnership along with WBIE include Coca Cola, Hasbro, Intel, Nike and many others. “Initially in Kenya, this alliance combines PEPFAR’s technical and programmatic capacity with the expertise of the private sector in messaging, branding, new technologies, and real-time market research to promote and maintain behavior change,” said U.S. Global AIDS Coordinator Mark Dybul.

For its part in the effort, WBIE is launching Pamoja Mtaani, a free multiplayer game that will debut in youth centers in Nairobi, Kenya. The game is being developed by Virtual Heroes Inc., a serious game developer that has previously worked on America’s Army and HumanSim, a training program for health care workers. The game features five characters brought together through random circumstance, each having lost what is most precious to them; together, they must seek justice and recover what was taken, as well as help an injured woman and seek guidance on their quest from the mystical Mama Africa. “As they work their way through various neighborhoods, they uncover and experience barriers and facilitators to behavior change,” the Partnership website says. “Through a variety of missions and mini-games, they learn the truth behind their actions and the true meaning of what has brought them together.”

The game hasn’t been released yet, but if trailers introducing the five main characters are any indication of the quality of the final product, then Pamoja Mtaani should be a true stand-out in the crowd of public service games. Games like Deliver the Net and ICED have valid points to make, but those points tend to be lost in tediously awful gameplay. The Pamoja Mtaani videos, on the other hand, show much higher levels of production values, and the game will also feature music from “iconic” Kenyan hip-hop artists including Jua Cali, Redsan, Prezzo and Amaniscript. The die-hard socialist streak in me hates to admit it, but it looks like the expertise and financial muscle of private industry may very well succeed where government-backed global organizations could not.