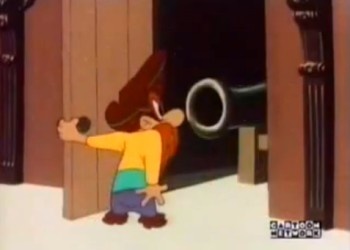 Warner Bros. has been sued by a German technology firm which claims the movie and television production company pirated its anti-piracy technology.

German firm Medien Patent Verwaltung claims that in 2003, it revealed a new kind of anti-piracy technology to Warner Bros. that marks films with specific codes so pirated copies can be traced back to their theaters of origin. But like a great, hilariously-ironic DRM Ouroborus, the company claims that Warner began using the system throughout Europe in 2004 but hasn’t actually paid a dime for it.

“We disclosed our anti-piracy technology to Warner Bros. in 2003 at their request, under strict confidentiality, expecting to be treated fairly,” the company said in a statement. “Instead, they started using our technology extensively without our permission and without any accounting to us.”

Medien Patent Verwaltung originally claimed that Warner was infringing on patent 7,187,633, called “Motion Picture and Anti-Piracy Coding,” but as The Hollywood Reporter discovered, the patent going by that particular name actually bears a different number and is held by none other than Warner Bros. MPV’s attorney in New York acknowledged the error and said that the suit will be refiled with the proper information.

Which has no bearing on the question at hand: Is Warner Bros. using pirated anti-piracy technology? This one could be fun to watch.