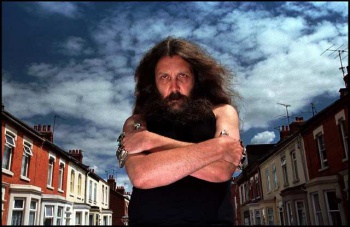 Alan Moore has stated he will no longer participate in interviews or speaking events, levying strong accusations against reviewers and peers in the process.

These days, Alan Moore is almost better known for controversies surrounding his writing than the writing itself, and considering he penned Watchmen, that’s no small feat. His anger isn’t necessarily unjustified given his experiences, but where other creators express dissatisfaction and move on, Moore tends to openly disparage anyone he feels wronged him. Still, that knowledge barely prepares one for Moore’s latest interview, where he unpacked his frustrations with superhero fans, critics, reviewers, and fellow writers before departing from interviews altogether.

“[These answers] might also indicate to a perceptive reader that I wouldn’t be doing this, at my advanced age, if I had any intention of doing this or anything remotely like it ever again,” Moore stated. “While many of you have been justifiably relaxing with your families or loved ones [during Christmas], I have been answering allegations about my obsession with rape, and re-answering several-year-old questions with regard to my perceived racism. I don’t imagine that anyone who has been following my career to even a cursory extent will be in any doubt regarding how I’m likely to respond to that, given my considerable previous form in such unwelcome situations.”

The interview itself, posted on the Slovobooks blog, was provided so Moore could respond to criticisms of his female and minority characters. After answering the questions however, Moore added “a couple of minor points” largely directed against individual critics. Among the named examples, Moore implies that reviewer Laura Sneddon purposely broke confidentiality agreements to spoil the ending of League of Extraordinary Gentlemen: Century for the Independent. He also critiques fellow writer Grant Morrison, accusing him of simply imitating Moore’s work throughout his entire early career. “While [Morrison] is clearly not the only reason why I have come to feel actual revulsion for the greater part of today’s comic world, he has probably done more than any other single individual to foul its atmosphere and make it unbreathable with his ongoing reeking incontinence.”

Moore has certainly crafted one of the most detailed put-downs of comic book history, to the point where I can barely summarize it. His response is over 20 pages and 15,000 words long, starting as a simple defense that transforms slowly, almost elegantly, into a verbal lashing of Moore’s critics. Eventually, one realizes Moore isn’t just defending himself; he is saying his final words before leaving the room. This is Alan Moore’s mic drop, and while it’s clearly hostile, it’s almost art in and of itself.

Artistic or not, whether Moore statements are factual isn’t quite clear. Sneddon herself has responded via Twitter, stating that Moore’s accusations are fabrications and that she was given full permission to publish plot details in her review. “I’m actually astounded at how many lies are in that,” she wrote on Twitter. “Far beyond just being grumpy to being outright poisonous … For a creator to bully a reviewer in such a way is incredible. As I say I have all the permissions I was given saved.”

At the moment, Sneddon is looking into defamation laws for possible legal action while Morrison has yet to respond. As for Moore himself, he’s unlikely to offer any further comments outside of his writing for the immediate future.

See When, And Where, Every Single Doctor Who Doctor Has Travelled