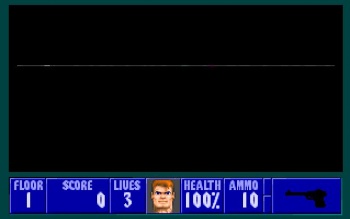 The creators of Wolfenstein 1-D turned a classic id shooter into a single line of playable pixels.

1992’s Wolfenstein 3D is known for popularizing the first-person shooter and defining the genre as we know it. As a tribute, Wonder-Tonic created Wolfenstein 1-D, a version of Wolfenstein 3D that plays out on a single line of pixels.

The basic concept is exactly the same as Wolfenstein 3D. Players take on the role of B.J. Blazkowicz as he attempts to escape from a Nazi stronghold and steal all of the Nazi treasure he can, but now B.J. is made of a small white rectangle just one pixel tall. Enemies are made of red and blue rectangles. Treasure, ammo, and health items are made from yellow, purple, and green respectively.

Instead of moving around in pseudo-3D, B.J. has to move to the right through the pixel tall level while shooting enemy Nazis before they shoot him. Enemies included in Wolfenstein 1-D are the typical 1-shot type and the automatic rifle type, so there’s some variety. B.J. still has to open doors too, though I couldn’t find any that led to a secret room full of golden chalices.

Wolfenstein 1-D isn’t as easy as you think it’d be at first, but once you get the hang of the game it’s over pretty quickly. I’m hoping the 5.25 inch floppy disk I ordered of later episodes will feature Mecha-Nazi Hitler and other bosses. Check it out here.