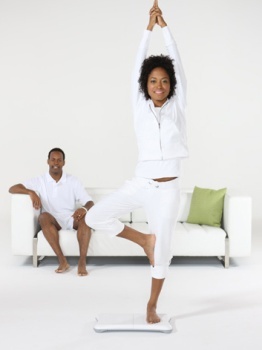 Sit up straight and listen closely, kids, while I tell you the tale of the woman who fell off her Wii Balance Board and turned into a raging sex addict as a result.

One fine day, Amanda Flowers, a 24-year-old catering worker from the U.K., was enjoying some healthy activity on her Wii Balance Board. But then she slipped, fell and turned into a nymphomaniac. “Wait,” I imagine you’re saying right about now. “What?” Well, according to an unnamed doctor, the young Ms. Flowers – who, by the way, is single – suffered some sort of bizarre nerve damage and now just the slightest vibration, “from mobile phones to food processors,” has her rarin’ to go.

“It began as a twinge down below before surging through my body. Sometimes it built up into a trembling orgasm,” she said. “With no cure I just have to try to control my passion by breathing deeply. Hopefully one day I’ll find a superstud who can satisfy me.”

There is, in fact, a recognized syndrome called Persistent Genital Arousal Disorder in which women experience “spontaneous and persistent genital arousal” that’s unrelated to any actual sexual desire. But as this article in Boing Boing explains, it’s not a lot of fun and being banged into satiation by a “superstud” isn’t really the answer.

Nonetheless, the danger presented to women by the Wii Balance Board is clear, so for heaven’s sake, ladies, be careful. And spread the word: I’ve already started the internet petition but until we can force Nintendo to act by putting warning labels on these things, everyone – which is to say, everyone with a vagina – is at risk.