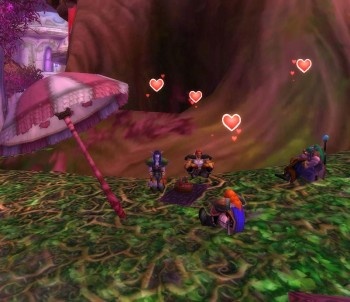 The Religious Society of Friends, better known as the Quakers, are apparently getting ready to launch a new online RPG called The World of Peacecraft.

The Click Heard Round the World blog, which claims to have contacts with “a number of Quaker institutions,” is reporting that the new game based on the Quaker faith will be launched in December. But the game will also offer something for people of other faiths, according to CEO Thad Thomas, who said, “Whether you are a Buddhist, Muslim, Jew or just a curious agnostic, you will find much to do and enjoy in World of PeaceCraft.”

“The Quaker United Service is pleased to announce the beta-release of the new MMORPG World of PeaceCraft, the first massive online game for a Christian religious denomination,” a draft press release for the game says. “Full of fun quests and adventures, the WoP will extend traditional Quaker values and historic testimonies — such as their work to end the slave trade, protesting against war, and worshiping in silence — into an immersive, 3D environment.”

The game will apparently begin in 17th century England during the time of Quaker founder George Fox, and from there move to the early 1800s and beyond, with quests involving women’s suffrage, the civil rights movement and even current Quaker protests against war and the death penalty. Game characters will also need to come together with other players to worship in one of 25 historically accurate Quaker meeting houses to replenish their “Inner Light” to help them stand up for the causes of justice, peace and equality.

Is this real? Is it a hoax, or a weak and tired joke? I have no idea, so I asked the Quakers. In the meantime, while we wait for them to respond, is this something you’d play?

UPDATE – Rik Riel, the author behind the Click Heard Round the World blog and a producer for Linden Lab’s Second Life confirmed to The Escapist that the blog entry and quoted press release were fabrications written to test how people would react to the news.

Riel has a history of these hoaxes usually based around virtual worlds, having admitted that posts about 3-D Shakespearean MMOs and ICANN (the internet organization in charge of maintaining website domain names) would be moving its resources into a virtual world were faked.