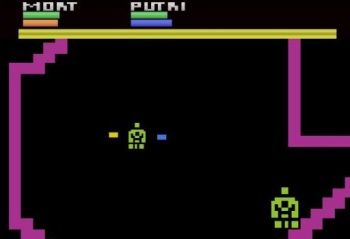 The fictional Atari 2600 WoW release has gone from being just a great joke to becoming a reality.

Initially just an April fools prank from Blizzard, World of Warcraft: The Molten Core was to be the first WoW title to hit a gaming console – albeit a console that stopped being produced 16 years ago. Hilariously, the folks over at Gamer’s University have made the fabled Atari 2600 game a reality.

Though it’s technically a PC port of an Atari game that doesn’t truly exist in cartridge format, The Molten Core is available for free download. The game nails the old school vibe perfectly and is meant to be played by two players at once via joysticks. However, it does work with your keyboard, and the controls can be conveniently re-mapped. The game doesn’t quite follow the specs Blizzard jokingly promised, but it’s an entertaining jaunt nonetheless.

The gameplay description tells all: “You are a mighty warrior and a mystical healer trying to clear the molten core of its evil and collect teh (sic) loots. Warrior – to attack an enemy, move yourself close enough and press your button. Priest – to heal warrior and self, press button while having mana. While fully healed, attack enemies with your wand for extra damage.”

Your quest is to obtain each boss’ loots in order to be “L33T” enough to defeat the next one. Conquer them in the improper order and you’ll fail. Sound bitchin’? It is.