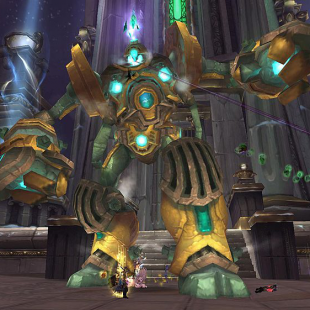 Activision Blizzard isn’t worried despite a significant decline in subscriptions between the months of January and March.

The world of massively multiplayer online gaming has seen some dramatic transitions in the past few years. Even with landscape changing things like the advent and increasing quality of free-to-play games, however, one constant has remained untouched: World of Warcraft is the king.

That being the case, the king’s subjects have been shrinking in numbers over the years. In 2010, the massively popular MMORPG had more than 12 million subscribers. A few years later that number would fall to about 9 million before climbing back up to 10 million following the 2012 Mists of Panderia expansion. While this uptick was good news for the aging MMORPG, it seems to have been only temporary. World of Warcraft’s user base has again declined, falling by more than 1.3 million subscribers between January and March of 2013.

To its credit, the game’s publisher, Activision Blizzard, doesn’t seem at all fazed by the news. Part of this has to do with the fact that the game still remains “the number one subscription-based MMORPG in the world’ and is still a valuable cash cow. That said, a gradual decline in the game’s user base is something its publisher had been expecting. “We do believe further declines are likely, and we expect to have fewer subscribers a year than we do today,” said Bobby Kotick, Activision Blizzard’s CEO. “We believe in the long-term value of this franchise and will continue to commit substantial resources to World of Warcraft.”

Even if the publisher were to cut off funds tomorrow and shutter the long running MMO, it would still have had an impressive run. In addition to making oodles of money, the massive popularity of World of Warcraft helped expose more general audiences to MMOs. Likewise, while some gamers may be leaving, there are millions more who have stuck with World of Warcraft through thick and thin and remain enthusiastic members of its magical universe. The day might come where this isn’t the case, but that’s a future that seems so far off it’s beyond the sight of anyone looking.

Note: Originally the article briefly mentioned between the months “March and June.” As we don’t yet possess a time traveling Delorean, this was a mistake. It now says, in all places, between the months of January and March. Our apologies for any confusion.