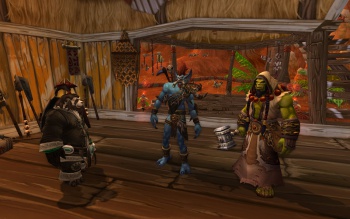 World of Warcraft is still the king, but its kingdom continues to shrink.

Activision announced this morning that it plans to buy back roughly 429 million shares from parent company Vivendi at a cost of over $5.8 billion, a pretty big bit of news for the biggest videogame publisher on the planet. Crowded in near the bottom of the email making that news public was a note relevant to the biggest subscription-based MMO on the planet: World of Warcraft finished the second quarter of 2013 with 7.7 million subscribers, down from 8.3 million at the end of March.

It’s still a huge number but it’s nonetheless a dramatic decline from its peak of 12 million back in 2010. It’s also not necessarily a surprise: When Activision Blizzard announced the first-quarter subscriber numbers in May, CEO Bobby Kotick said further declines were likely and that “we expect to have fewer subscribers in a year than we do today.”

The number of World of Warcraft subscribers has been declining for the past few years but Kotick committed to slowing or stopping the slide, saying Activision Blizzard “will continue to commit substantial resources to World of Warcraft.” The company took a big step in that direction earlier this month when it confirmed the forthcoming addition of microtransactions.