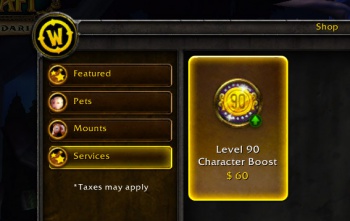 For a $60 fee, you’ll be able to instantly boost one of your World of Warcraft characters to level 90.

For a few minutes after the World of Warcraft servers came back up from maintenance, a glitch allowed players to access the upcoming, officially unreleased in-game store, showing that unless Blizzard comes out and announces otherwise, paid level 90 boosts will set you back $60 a piece.

When Blizzard first announced its upcoming World of Warcraft expansion pack: Warlords of Dreanor, one of the promised features was the one-off ability to instantly boost a single character to level 90, no doubt meant to coax back old players who haven’t played the game for an expansion or two. We later learned that Blizzard was experimenting with additional, paid level 90 boosts, and it now looks like they have made a decision.

It’s likely that the paid level 90 boosts will go live at the same time pre-orders open for Warlords of Dreanor (thus giving pre-order customers a free level 90 boost), which according to Blizzard will, of course, be “Soon™”.

We have reached out to Blizzard for confirmation on the paid level 90 boost’s cost.

So there you have it, boosting your character to level 90, unlike a faction or race change, is pretty much past what we can call honestly a “microtransaction” with a straight face. There’s nothing “micro” about $60, as it’s more or less the price of a full, new game. It’s even more than the actual expansion costs.

Is the journey from 1 to 90 so tedious that you would be willing to drop $60 on skipping it? Do you think the boost price is fair, or do you think it should be a bit lower?